Monsters University. It's a prequel! 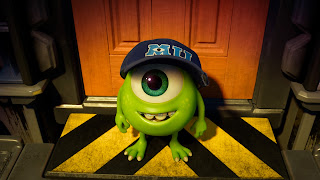 I think that all of the podcasting and twittering and whatnot has upped my Disney-brain quite a bit over the past month or so. I'm definitely at a fever-pitch, similar to how I get right before a long-planned trip to Disney World. Only like.. all the time. It's probably not a great thing, ultimately but I do love it so.

Speaking of... I'm going back to Disneyland in a couple weeks for the first time since the incident. I look forward to giving you all the full updates.

In the meantime, I went to see Monsters University, and I've got some thoughts.

Monsters U was pretty well received, overall. It's "Certified Fresh" on Rotten Tomatoes, and that's usually a pretty good signal of success, though at 78% it's still not quite reaching the levels of most non-Cars Pixar movies, and after watching it... I just not sure why.

I laughed out loud several times throughout the movie, I was invested in the characters, and unlike many prequels it had some surprises in terms of how characters ended up where they were when we first met them in the original films.

In fact, I'm going to go out on a limb and say that I liked Monsters University more than I like the original Monsters Inc. Whoooaaaa now, Muchacho. Explain Yo'self.

- The Setting.
Both movies are, to at least some degrees, send-ups of a specific setting. The first is the "world" and the second is "college". I just think that Monsters Inc doesn't have a chance to really focus on that kind of examination of how the world of Monsters is different than ours in funny ways. First, it's way too big and voluminous to get into a lot of detail (I admit there are TONS of throwaway easter-eggy things in the first movie that require a million views to catch, but I'm sure this one does too). College, on the other hand, is just sooo ripe for parody. The cliques. The boring classes (Scream Canister Design!!). The girls. The friends. The scary-ass teachers. It's a small enough world to really allow the filmmakers to focus in, but it's textured enough to be able to throw in a million details.

- The lack of children.
I never enjoyed the Boo portion of the original's plot as much as I think most people did. Aside from the abject fear the little girl struck into the hearts of monsters, I just didn't find her all that appealing to watch. I much preferred the monster stuff. This movie? Nothing BUT monster stuff, and I loved it.

- The monsters!
Okay... Small quibble here with the Monsters Franchise production design, but I think that almost all of the monsters are too cute looking and not at all scary. Obviously, if a 4 foot snake-lizard thing came out of my closet and roared at me, I'd be scared, but overall I think they're all kinda cute looking. That said, I think the monsters are awesome, and this one had a crap-ton (that's metric) of them. I love how they all move differently. How they all have such varied physicality. On top of that, I love how they all use their physical difference to scare kids differently. It's so clear that the animators had an awesome time figuring out how a tubby, tentacled monster with a bat wing mustache would scare a kid differently than giant, fur-covered monster with giant fangs.  This movie had so many awesome monsters!! (Special shout-out to the dean of the Scare College. She was actually scary. She both flies AND has a million creepy bug legs. Eeessh).

I'm not gonna get too deep into the plot, but I highly recommend this flick. It does everything a prequel needs to do (sets up how familiar friends meet, rivalries start, jobs are obtained), and it goes there in a particularly creative, unexpected way.

Some additional notes:
- I wonder if the joke about how close-up magic is super nerdy will run out of steam some time. First Pitch Perfect and now this?
- This is the second Disney animated movie I've seen this Summer (Planes is the other) where female characters are basically non-existent. It's probably my biggest issue with this movie in particular, because I mean... College is roughly 90% about hooking up. I get that this is a movie designed to appeal to kids, so you can't have monsters banging each other and whatnot, but whereas Planes was probably justly criticized for placing its only female characters in strictly romantic entanglements, this movie was BEGGING for them.
- Charlie Day's portrayal of a sort of strange, darkly funny monster in Oozma Kappa is one of the more entertaining small roles I can remember in a Pixar movie. They use him jusssst enough.
- Not used enough? Nathan Fillion's Frat boy character. Maybe there were too many villains? I dunno. I wanted to see more of him.
- Speaking of Villains... Randall's thread must have been cut for time at some point, because he's prominent at the start, and then sort of disappears for a while.
Posted by Beefy Muchacho at 10:14 PM