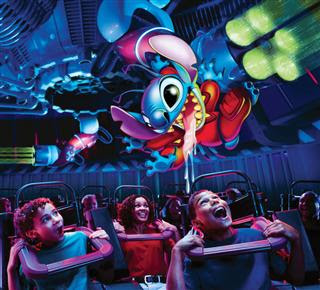 This is far more fun than anyone has ever had on this ride.
I figure since I’m planning on writing about every ride and attraction at Disney that I will occasionally have to discuss something I don’t really like. There aren’t many of them around, but here and there Disney does create a dud.

The saddest thing about it, is that once upon a time, the ride was known as “ExtraTERRORestrial Alien Encounter” and it was legitimately one of the scariest, most insane attractions Disney has ever created. The premise was that you were at an intergalactic space convention at the “Convention Center” and while watching a demonstration of some new teleportation technology, something goes horribly wrong and a bad, scary alien is teleported into the demo room. At different points the lights would go out, you’d feel it stalking you, breathing on you and generally menacing you.

It was actually really scary.

As it turns out, it was too scary for most kids, and the parents of these kids, who complained that their kids had nightmares and refused to ride other rides once they departed from Alien Encounter, because they were afraid something like that would happen on Buzz Lightyear or something.

Personally? I loved it. It was creative, and fun, and provided scares of the type I could get behind (the non-roller coaster variety).

Unfortunately, Disney bowed to the pressure and shut down the ride in late 2003, and not having a fully formed alternate plan (the same site had housed some of the classic early Tomorrowland attractions such as “Flight to the Moon” and “Mission to Mars”), so they hastily patched together a new ride.

Now, let me be totally clear. I don’t begrudge Disney closing down a ride that was largely unpopular with their number one fan demographic. As much as I’d like to think I’m a priority, I know that 10 year olds are far more important to keep happy.
Anyway, in 2004, the ride re-opened with the new, and incredibly popular Stitch from Lilo and Stitch as the main character. The general ride mechanics weren’t really adjusted much. The premise is that you were visiting a space prison instead of a convention, and the “teleportation tube” is now a “containment unit”. Instead of a terrifying alien creating breaking out of the teleportation tube, adorable and hilarious Stitch breaks out of the containment unit and wreaks all kinds of havoc. The lights still go out, you still feel him stalking around, and you can even feel his breath (and smell it too, as Disney has developed a truly disgusting scent that represents Stitch’s breath.)

It’s just… It’s not that good. It’s kinda boring, and anyone who liked the original attraction leaves disappointed that it isn’t as scary. The kids are still kind of scared (there was a kid who sat next to me and freaked right out when Stitch tries to lick your neck. As a result, it remains one of the least popular attractions at the park. Theme Park Insider has it rated as a 3 of 10, which is the lowest rated attraction or ride at Walt Disney World.
I wish Disney had taken the time funny conceptualize something else instead of slapping this revision together so hastily. It just reads as being a bit under-developed. The thing is… I believe it has potential.

Stitch is one of the funniest recent characters, and from what I’ve read/am told, he’s the 2nd most popular character at Disney World these days (after Mickey). There’s no reason this couldn’t be a really cool experience.

I’ve read that they’re working on making the ride better, and more Disney-level immersive, by adding some additional animation and voice work. I’m just not sure that it’ll ever really do much good. One of the biggest flaws in the attraction in that of the 8 minutes you spend in the main chamber, a full 3 of them are in complete darkness. You’re deprived of the cool animations and animatronics that Disney could be busting out.

The Stitch figure is really really cool, actually. When you do see him, that is. Too much of it involves Stitch menacing you from above (there’s a point where he presses down on your restraint that feels pretty claustrophobic, and was the point where the kids totally bailed. )

I just think they need to shut it down, think it through a little better, rewrite the script, and work on creating a more visual show. It even feels a bit shabby for Disney, which isn’t what I’d say about almost any other attraction in the whole dang place.

So, while I have nostalgic feelings about a lot of attractions, even the marginally bad ones like “El Rio del Tiempo” (I prefer not to call it The Gran Fiesta), I don’t have any real fond feelings for Stitch’s Great Escape. For me, it’s one of the only examples of Disney making a clear downgrade in quality due to public reaction catching them off-guard.


Coming up later this week, I will be posting my ranking from Worst to Best of all Pixar feature films. I’m looking forward to the outrage from my 3 readers about my number one choice.

Posted by Beefy Muchacho at 5:46 AM