The Carousel of Progress 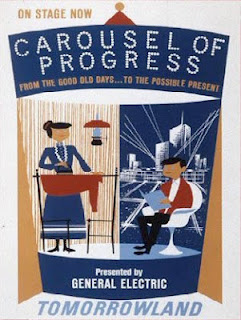 Muchacho’s Attraction Reviews is a recurring series for Beefy Disney where I discuss and break down the individual attractions at Walt Disney World. They’re usually an unfocused, rambling collection of impressions and memories.

As I learned more about Walt Disney, I began to realize just how fascinated he was with the future. He created Tomorrowland as an homage to that fascination, and one of the true centerpieces of Tomorrowland is an attraction called The Carousel of Progress.

The Carousel of Progress initially debuted, along with the vexing “It’s a Small World” at the 1964 World’s Fair in New York. It was designed by WED Enterprises (now known as Imagineering) to represent the
progress of technology starting at the turn of the 20th Century. The attraction was popular enough that they brought it to Disneyland in 1967, and then moved it from there to Walt Disney World where it opened in 1975. The original song “There’s a Great Big Beautiful Tomorrow”, written by the Sherman brothers, was replaced when it moved from DL to WDW, but was reinstated in 1994 in the great “redesign” of Tomorrowland. Initially, as with most attractions at the World’s Fair, the attraction had a sponsor. General Electric sponsored The Carousel of Progress from its inception to 1985 when they let the sponsorship lapse.

The attraction is a giant circular theatre with 6 scenes. Each scene is set on a center hub and the audience rotates around in front of each scene. It’s actually pretty incredible, because if you think about it… when the ride is at capacity, it’s moving about 1400 people at all times. (I’ve never seen it at capacity).

The first and last scene are basically the same, and are more of those "Time Killer" areas that help with loading and unloading. Each of the other scenes represent an era of technology where audio animatronic figures (primarily narrated by a middle aged man and his dog) talk about the amazing technology of the day, and always cap it with their opinion that technology has peaked and can’t get any better. This, of course, is the running joke of the piece, because the entire audience obviously knows that the Ice Box wasn’t the apex of food preservation technology.

I love this attraction.

It’s simple, and kind of silly, and definitely cheesy, but I don’t care. It's a wonderful peek into how, Walt Disney, one of the great visionaries in American history believed the future would be. He made a whole Tomorrowland where his fantasies of the future and the future of technology could come to life. It’s really a wonderful nostalgia piece, and one of my favorite diversions from the heat of Florida as I make my way through The Magic Kingdom.

Each scene focuses on a slice of life in a different era in America.

The first takes place on Valentine’s Day close to the start of the 20th Century (1904 based on references to the St. Louis World’s Fair). The years of each scene are never explicit, but there are always contextual clues. This one focuses on the current state of “modern” conveniences, in this case all pre-electric. This scene ends with “There’s a Great Big Beautiful Tomorrow” (all of them do), and the audience rotates to the next scene.

The second scene takes place around 1927 (Lindbergh’s flight) and the 4th of July. The third is Halloween time, and takes place in the 1940s, and the final scene is Christmas time around the year 2000. Featured in all of the scenes are various members of the man’s family. His wife, who’s usually the unwitting victim of the man’s ineptitude with technology (using an electric mixer to stir wall paper glue, blowing fuses by plugging too many things into one outlet, burning the Christmas turkey by accidentally setting the oven temperature too high). There’s a son who’s always getting into some sort of mischief (The biggest laugh in the show almost always is when you realize the kid is looking at a view finder with nudie pictures in the first scene), the daughter who’s perpetually embarrassed by her father, and Uncle Orville, who gets No Privacy At All.

It’s really a fun show, and lovely little slice into the nostalgia of the 1960s, and it offers such a bright and positive view of the progress of technology.

I love how the scope of it is so small. They really just care about the little home conveniences and technologies that make our daily lives better. ( I think that this was probably the influence of long-time sponsor General Electric.) It does make mention of larger scale achievements like Lindbergh’s flight, but for the most part it keeps the focus small and personal. I like that. It's the view of technology from the point of view of the common man.

Of course, my favorite thing about the show is the legendary song by the Sherman Brothers “There’s a Great Big Beautiful Tomorrow”.

It plays at the start and end of every scene. The lyrics are fairly simple, so it’s almost begging you to sing along by the end. For many years at Walt Disney World, there was another song in its place called “The Best Time of Your Life”. As I mentioned before, this song was in use from the move to WDW in 1975 until the “Redesign” in ’94, and I don’t remember it, but I can’t imagine why they’d ever want to use a song other than “There’s a Great Big Beautiful Tomorrow”. It’s so lively, and full of joy.

LISTEN TO IT HERE!

How can you not love a song with a sentiment like that? Sure a little cheesy, perhaps, but it fits wonderfully into the context of the show, and the idealism that accompanied it from its start at The World’s Fair, and has stuck with it up until today.
The show isn’t without its’ flaws. They were doing so well at the start by having a scene take place about every 20 years, but now they’ve got a 60 year jump from scene three to four. And of course, scene four, which is held out to be all about the best technology of today and the future, is painfully, horrifyingly outdated. Almost to the point of being laughable. They did change up a few small things (like adding a flat screen TV) a couple of years ago, but I think it’s time to re-imagine the final scene again. I’m kind of shocked that with the connection to Steve Jobs and Apple, there wasn’t a big overhaul of the last scene to feature all kinds of crazy Apple products.

That’s really my only complaint, though…

I highly recommend checking it out on a hot or rainy day, or if you have a day where you’re not clamoring to get onto ever single fancy ride in Fantasyland (The day will come soon where it’s even crazier than ever). You know… you should check it out anyway. It’s one of the last bastions of Walt’s vision of Disney World (along with The Tiki Room and a couple of others.) Just go. It’s fun.

There have been many rumors in recent years that Disney plans to shut down The Carousel of Progress. For a while after 9/11, when crowds were small, they closed it briefly, and then only re-opened it for seasonal service. This, of course, only exacerbated the rumors. I remember going in 2008, convinced it’d be the last time I’d ever get to ride. Of course.. 4 years later, she’s still going strong, and Disney says they have no plans to close her down. I hope they stick to that, because while it’s a little old fashioned, and certainly very corny, it’s a fabulous reminder of Walt Disney’s own imagination and ideals. It's pretty hard not to get behind that.

Posted by Beefy Muchacho at 4:53 PM